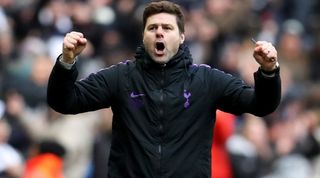 With Tottenham looking ready to move back into their new-look White Hart Lane home, Mauricio Pochettino is finally going to be given money to spend in the transfer market.

The north London club’s stadium redevelopment has been hit by delay after delay, leaving Spurs with a costly extended stay at Wembley.

This has left boss Pochettino with little room to land targets in the transfer market, and the club have not spent any money in the last two windows.

But with the first test event at the new ground taking place today, their stadium saga is set to finally end.

And Pochettino has wasted no time identifying his summer targets.

According to the Sunday Express, Pochettino believes Wolves’ Diogo Jota could be the man to help bolster Spurs up front. While Harry Kane’s form is as good as ever, and Son Heung-min has been adept at filling in up front, back-up option Fernando Llorente has not offered enough threat when he has been given a chance.

Jota joined Wolves from Atletico Madrid for £12.6 million last year, and his form since has seen that value skyrocket.

Tottenham may hope to get good value on their other target, though.

Aston Villa midfielder Jack Grealish is back on the club’s radar, after a failed £30 million last summer.

Villa still harbour hopes of promotion this season – they are currently sixth in the Championship – but if they fail to go up once more, they will find it difficult to say no to a similar approach.

Tottenham will have the services of centre-back pair Jan Vertonghen and Toby Alderweireld next season after the two rejected the advances of Ajax.