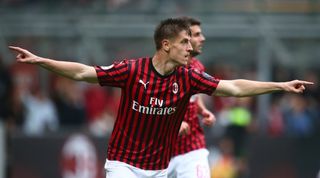 Piatek was prolific for Milan last season, once he'd joined from Girona in January.

However, the Pole has scored just four goals in 18 Serie A appearances and Milan are willing to listen to offers, especially now that Zlatan Ibrahimovic has re-joined the club.

It's believed a host of Premier League clubs have made proposals to Piatek this month as they seek to bolster their attacking options.

According to Goal, Piatek wants to join Tottenham more than other suitors Chelsea and Manchester United after discussions with the club.

Piatek was reportedly offered to Chelsea and Manchester United by super-agent Pini Zahavi, who was brought in to help broker a deal.

Milan want €30m for the striker, the same amount as they paid for him a year ago.

Although, it seems Tottenham are reluctant to meet the full amount and would much rather an initial loan deal with an option to buy.

Spurs have reportedly told Milan they'd be happy to pay a higher loan fee to avoid agreeing to a purchase obligation either.

Harry Kane's injury has made Spurs' search for a striker all the more pressing and they will no doubt be keen to seal a deal before the window shuts.

Only today, the north London club activated a clause in Giovanni Lo Celso's contract to make his move from Real Betis permanent - he's now contracted until 2025.

Spurs are also reportedly close to completing a deal for PSV's Steven Bergweijn for a fee close to €30m.

These are in addition to bringing in Gedson Fernandes from Sporting Lisbon on an 18-month loan deal with a €50m option to buy.

Daniel Levy is hoping to give Jose Mourinho all the ammunition he needs to fire his way into the top four before the season's end.

Quiz! Can you name every current No.10 in the Premier League?

Quiz! Can you name the most valuable players in the world over 30?