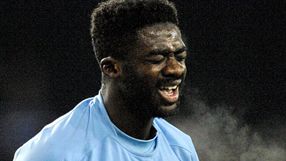 The Football Association (FA) informed City that an A-sample provided by the Ivory Coast international had tested positive for a specified substance.

GEAR:Manchester City home kits from £20 through Kitbag. Free delivery on orders over £50

The 29-year-old has been suspended from taking part in all matches pending the outcome of the legal process.

Toure played for Arsenal from 2002-09 before joining City for around 16 million pounds, one of a number of big-name players to move to Eastlands after the club's takeover by billionaire owners from Abu Dhabi.

Toure, who has played over 80 times for his country, was made captain by former coach Mark Hughes but lost the armband this season after the arrival of manager Roberto Mancini.

City are third in the standings, 10 points behind leaders Manchester United but on course to qualify for next season's Champions League.