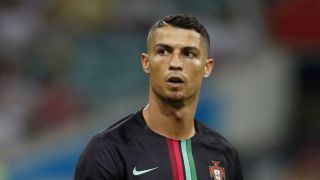 The prospect of Cristiano Ronaldo strutting his stuff for Juventus next season would be a dream come true for Bianconeri legend David Trezeguet.

Ronaldo's future at Real Madrid has been the subject of intense speculation since Portugal were eliminated from the World Cup, with a move to Turin emerging as a potential option.

A reported fee of €100million could see the five-time Ballon d'Or winner swap LaLiga for Serie A, and Trezeguet would be delighted to see him at Juve.

"I'm not following the negotiation too closely, but for Juventus, just the fact that Ronaldo is thinking of coming is significant," Trezeguet told Gazzetta dello Sport.

"We wait, but dreams can happen sometimes, and this is certainly one of the those.

"Should [Gonzalo] Higuain be sold to make way? It's the choice of the club and the coach, but I think great players can always play together.

"We're talking about two great players who have already played together at Real Madrid. I'm for cohabitation.

"It's too soon to say [whether Ronaldo would make Juve Champions League favourites], but they're in the group of teams that can win it. They have the weapons and the mentality to do it."

While Trezeguet is excited, another former Juventus star is surprised to see Ronaldo linked with an Italian switch.

"It will be a surprise move to be fair," Edwin van der Sar told Omnisport, speaking courtesy of Adidas. "If he makes a move it's a different challenge.