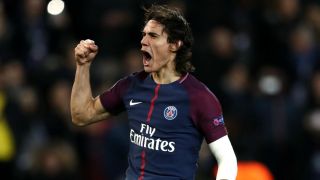 The European champions are rumoured to be lining up an approach for the prolific striker in an attempt to soften the blow of Cristiano Ronaldo's move to Juventus.

Any attempt to lure the Uruguay international from Parc des Princes is likely to prove difficult, though, as Tuchel is adamant the 31-year-old will still be at his disposal when the transfer window closes.

"This is my feeling and I have not heard such a thing [that Cavani wants to leave]," the PSG boss told reporters.

"I spoke to him and he didn't mention anything.

"He said he is looking forward to joining us [in pre-season]. He is a key player for us."

Weigl flourished under Tuchel during their two seasons together at Signal Iduna Park, making 60 Bundesliga appearances and breaking into the national team.

Tuchel, though, insists no deal has been struck for the player, although he did leave the door open to future discussions.

"Of course, there are rumours since I signed here because he was the kind of player that joined with me in Dortmund and had a great career and great development.

"He is a player a lot of teams in Europe would like to have in their squad and he can help a lot of teams, but right now there is no such thing in the next days."