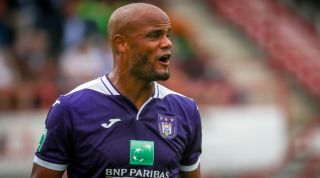 Former Manchester City defender Vincent Kompany has announced that he will miss his own testimonial at the Etihad Stadium this evening due to injury.

The veteran defender, who now hold to the role of player-manager at his boyhood club Anderlecht in the Belgian First Division, was due to take part in a farewell match at the Citizens home ground in a City Legends vs Premier League All-Stars match.

However, the 33-year-old has stated that he will miss the match due to a hamstring problem.

In an interview with the media ahead of Wednesday evening’s match, Kompany said, “Unfortunately I won’t be starting tonight or playing.

“It’s typical of me, I’ve got a slight hamstring injury so I couldn’t risk it tonight but there’s a lot of awesome players.

“It’s a celebration to say goodbye and I don’t have to be on the pitch. It’s for an unbelievable cause.”

Wednesday evening’s match at the home of the champions will see a group of City players past and present take on a collaboration of Premier League icons, with all proceeds from the match going towards the Tackle4MCR initiative.

The programme addresses the issue of homelessness and rough sleeping in the city of Manchester and was set up by Kompany alongside the city’s mayor Andy Burnham.

While Kompany will not be lining up in the City legends side for the match itself, it will be filled with former stars of the four-time Premier League champions such as Mario Balotelli, Kolo Toure, Samir Nasri and Craig Bellamy.

Current City players David Silva and Sergio Aguero will also be part of the legendary side.

The City Legends vs Premier League All-Stars match will kick-off at 7.45pm at Manchester City’s Etihad Stadium, with viewers able to watch it on Sky Sports Premier League.

QUIZ Can you name the 50 highest foreign goalscorers in Premier League history?