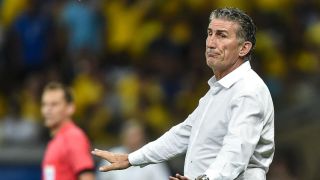 Mahdi Ali stepped down from his position after almost five years in charge following the 2-0 defeat to Australia in March and UAE have settled on Bauza as his replacement.

The 59-year-old had been without a job since being dismissed by Argentina on April 11, exactly eight months after replacing Gerardo Martino, leaving the South American giants sitting precariously in fifth in World Cup qualifying.

He will now turn his attentions to UAE's final three qualifiers for the 2018 World Cup in Russia.

But reaching the finals already looks unlikely, with third-placed Australia four points ahead on 13, while Japan and Saudi Arabia are another three points ahead in the two automatic progression berths.

Bauza's first competitive match in charge will be the trip to Thailand on June 13.