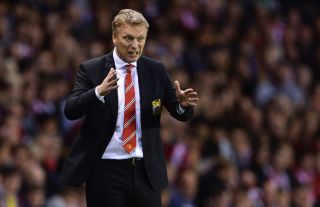 Moyes will be hopeful the UEFA Champions League fixture serves as a distraction to his players, who have won just two of their last six matches in all competitions.

United have made their worst start to a league season since 1989 and as a result the pressure has heaped on new boss Moyes, who saw his side held to a 1-1 draw against Southampton on Saturday.

They have performed well in the Champions League though, following up a 4-2 home win over Bayer Leverkusen with a hard-earned 1-1 draw at Shakhtar Donetsk earlier this month.

Wayne Rooney's strike against Leverkusen means he is now Britain's all-time leading scorer in the Champions League with 29 goals.

The match could be crucial for United, with a home defeat potentially fatal given they face tricky trips to Sociedad and Leverkusen in their final three matches of Group A.

United have lost their last two home fixtures against Spanish sides – to Real Madrid in the round of 16 in last year's Champions League and to Athletic Bilbao at the same stage of the 2011-12 UEFA Europa League.

And they have won just one of their last six meetings against La Liga teams at Old Trafford, although that was a 1-0 success against Barcelona in the semi-finals of the 2007-08 UEFA Champions League, which they went on to win.

Tom Cleverley (calf) and Rio Ferdinand (groin) missed Saturday's draw against Southampton and are in doubt for Wednesday's match.

Real Sociedad registered a much-needed win on Saturday, winning 2-1 at Valencia to end a winless run of eight matches in all competitions.

That result lifted them to 11th in La Liga and highly-rated French attacker Antoine Griezmann – who scored in the victory – hopes it inspires them to an Old Trafford upset.

"We're not going (to Manchester) merely as tourists. We are going as a quality side who will be trying to win three points that will help us to continue in the tournament," Griezmann said.

"We will analyse what we did well last Saturday and look to repeat that."

Real Sociedad have lost both of their Champions League matches, with a 2-1 defeat at Leverkusen earlier this month particularly heart-breaking, as Jens Hegeler scored a stunning free-kick in stoppage time for the winners.

They need a victory and will be thankful midfielder Xabi Prieto returned from a thigh injury on Saturday.

Midfielder Esteban Granero – who is on loan from QPR – is a long-term absentee with a serious knee injury.