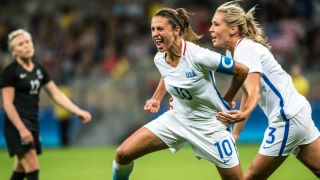 Defending champions the United States kicked-off their Olympic women's football tournament with a win over New Zealand, while Germany put six goals past a hapless Zimbabwe.

USA, winner of gold in London in 2012, started things brightly against New Zealand on Wednesday with a goal inside nine minutes through captain Carli Lloyd.

It took USA just seconds to double their lead in the second half, with Alex Morgan finding the net to wrap up a 2-0 win in Belo Horizonte.

Canada got off to a perfect start with a 2-0 win over Australia despite having just 10 players for the majority of the game, Janine Beckie and Christine Sinclair scoring in each half.

Australia, ranked fifth in the world, were favourites going into their Group F opener with Canada, but Beckie was on hand to tap home just 20 seconds into the first half for the North Americans following a defensive error, which was the fastest goal in Olympic women's football history.

scored the fastest goal in the history of the Olympic women's football tournament in 1' August 3, 2016

Lloyd's performance for USA was exactly what the side needed from their captain, scoring the opener in the two-goal win over New Zealand.

BRAZIL OPEN WITH A WIN

Monica scored Brazil's opener to help the host team defeat, even if it was not the prettiest of finishes.

"I am very happy because of the work we are doing. There is nothing better than to begin with triumph. My sensation when I scored the first goal was complete happiness," she said.

"It was a close game and it doesn't matter if the goal was not so beautiful, it is a goal."

Matchday two takes place on Saturday with the pick of the games seeing USA come up against France in Group G, while Australia tackle Germany in Group F.