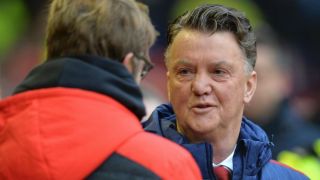 Captain Wayne Rooney netted the only goal of a scrappy encounter 12 minutes from time at Anfield to set a new record for the most goals scored for a single club in Premier League history with 176.

It was a big win for manager Van Gaal, who has faced heavy criticism over United's perceived negative style of play and inconsistency in the top flight this term.

And the Dutchman is adamant his team can take the confidence garnered from their win to mount a renewed assault on the title.

"We can do it," he answered when quizzed on United's chances of winning the league.

"This game shall give a big boost to the players, the fans and everyone in the environment of Manchester United.

"Now we have made a good start in 2016, to beat Liverpool for the second time in a row is it marvellous, it gives a big boost for the players and the fans so I hope it shall continue with winning.

"That is why we are here, to win our games and at end of the season to be in the first three positions of the league."

Rooney, who now has five goals in his past four outings in all competitions, had not scored at Anfield since January 2005.

And Van Gaal feels the goal was of particular importance to Rooney given his affinity for boyhood club Everton, having started his career at Liverpool's local rivals.

"We know Wayne Rooney has played for Everton and now plays for United so he wants to score against Liverpool, it means a lot for him," he added.

"The goal came from the first indirect corner and we ask for that as it always more dangerous.

"The ball from Mata was perfect, as was the header from Fellaini, but he didn't have the luck that Wayne does."