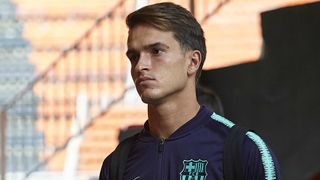 Barcelona boss Ernesto Valverde has backed Denis Suarez to be a success with Arsenal, with the midfielder's move expected to be completed imminently.

It is reported that the 25-year-old will join the Gunners on loan until the end of the season, having first agreed to extend his contract with Barca until 2021.

Valverde says the deal is not quite finalised but hopes the move will benefit all parties, with Suarez eager for regular football after making only two LaLiga appearances this season.

"I know Denis was in this situation. It's not official yet and we have to wait a little," Valverde told a news conference on Tuesday when asked for the latest on Arsenal's approach.

"It was a possibility that everyone valued, and we hope that things go well."

Valverde insisted Ivan Rakitic remains a vital part of his plans, though, despite recent reports suggesting Chelsea will try to sign him.

"He is a very important player," he said of the midfielder, who stressed this week that he wants to stay at Camp Nou. "He has been showing that throughout these last few years. There is no doubt, but to guess the future is to go too far.

"He is essential for us."

Valverde also suggested he could yet extend his stay at Barca beyond this season, with some reports suggesting he will leave at the end of 2018-19.

The former Athletic Bilbao boss says he has a good understanding with president Josep Maria Bartomeu and will offer an update when the time is right.

"I've always said we have a good 'tuning' and when there is something to say, we'll say it, without any problem," he explained.

Valverde: "I believe Camp Nou will respond. Football is made up of grand moments. We want to put on a great show that fans will be able to look back on over time. I hope we can exploit our home-field advantage." #CopaBarçapic.twitter.com/2wZkY3ugJd— FC Barcelona (@FCBarcelona) January 29, 2019

Barca take on Sevilla on Wednesday in the second leg of their Copa del Rey quarter-final, looking to overturn the 2-0 deficit from the first leg.

Valverde hopes the Camp Nou crowd can help to inspire a turnaround, although he admits it will be up to the team to bring about the best from the supporters.

"In all the statements we make, what appears is that we want to carry on in this competition," he said. "We know that in these games the backing of the fans is essential, but we need to push them. It's the team that ropes in the fans and that's what we have to do.

"It's a challenge for us. We didn't get a good result there and we have 90 minutes left to turn it around.

"When the game requires it, we always take a step forward and we're going to try to get through."