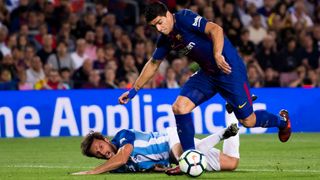 Barcelona boss Ernesto Valverde has defended Luis Suarez's frustrated reaction to being substituted in the 2-0 win over Malaga on Saturday.

Suarez was visibly upset with his 83rd-minute withdrawal and did not shake Valverde's hand as he left the pitch.

The 30-year-old earlier failed to convert a gilt-edged chance in another sub-par display, with his recent scoring record reading just one goal from five club appearances.

However, Valverde was unconcerned by both the star striker's reaction to the substitution and his loss of form.

"Suarez is ambitious and no one likes to be substituted," Valverde said at his post-match press conference.

"Everybody wants to be an undisputed starter every time. I do not see any problem.

"It was the third game he has played in six days, and he is getting chances, which is the main thing for a striker."

0 - Malaga are the only side that Luis Suarez has failed to score against in La Liga (11 shots attempted in five games). Strange. October 21, 2017

Uruguay's all-time leading goalscorer was on Friday confirmed as a surprise omission from his national team's latest squad, with the Uruguayan Football Association citing rehabilitation from a knee problem as the reason for his absence.

Despite Suarez failing to strike, goals in either half from Gerard Deulofeu and Andres Iniesta gave LaLiga leaders Barca a workmanlike home victory.