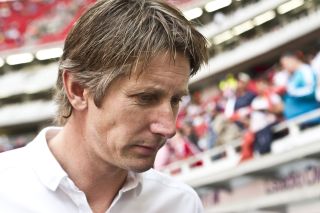 The champions were comfortable 3-0 winners of Aston Villa on Sunday, but they had failed to win their previous four Premier League games to leave Moyes under pressure.

Despite a disappointing start to their title defence, Van Der Sar, who spent six years at Old Trafford, believes Moyes will get things right and guide United up from eighth in the table.

"I think it will take some changes and take a while maybe," he said at the UEFA Champions League draw, which saw United paired with Olympiacos.

"(Alex) Ferguson has been there for 26 years and you're not going to change that straightaway.

"It will be a good opportunity for them (in the) next round in the Champions League and some games over christmas to get some good results."

United will look to record back-to-back Premier League wins for the first time since November 10 when they host West Ham on Saturday.