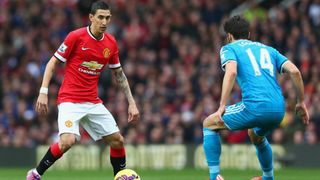 United got their push for UEFA Champions League qualification back on track, having lost 2-1 at Swansea City last time out, thanks to a second-half brace from Wayne Rooney.

The turnaround was arguably prompted by Van Gaal's decision to replace the ineffective Di Maria with Adnan Januzaj at half-time.

"I want to win as a manager - I have to observe and analyse and I have to then make the steps that are necessary to win," said Van Gaal when discussing the substitution at his post-match press conference.

"I thought I had to change Angel for Januzaj and we were then better in the second half so I cannot say it was the wrong decision.

"The difficulty, not only with Angel, is players have to adapt to the Premier League.

"I have explained already that the rhythm of the game here is so high - it is much higher than in other countries.

"He has to adapt to the culture so we have to give him time to adapt and also to lift his confidence again. That's also important.

"He is a human being like me and like you and you can make mistakes. He is a top player so he shall overcome this period, I hope."

Van Gaal felt his team wore the scars of the Swansea loss during the opening stages against Sunderland before turning in a satisfactory display.

"I think we started not so good - the first quarter of the game [we were] very nervous, maybe because of the loss against Swansea City," the Dutchman added.

"But after that first quarter we came into the match. We created chances and we didn't give any more chances away.

"In the second half I think we played very well. We switched the play via the wings, we created a lot of chances and we scored goals."