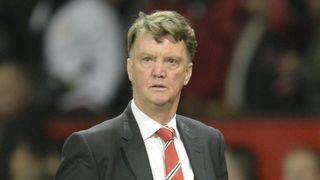 Manchester United manager Louis van Gaal has hit out at "awful and horrible" media stories that he offered to resign in the wake of last weekend's 1-0 defeat at home to Southampton.

The Dutchman has faced severe criticism this season and the pressure was cranked up when United slipped to their sixth Premier League defeat of the campaign last Saturday - Charlie Austin's debut goal adding to Van Gaal's woes.

In the aftermath of the loss it was reported that Van Gaal offered to resign, but was persuaded to stay on by executive vice-chairman Ed Woodward.

However, former Barcelona and Bayern Munich boss Van Gaal denied the speculation before launching into a tirade against the media.

"I think I have mentioned that [resigning] ever," Van Gaal said ahead of Friday's FA Cup fourth-round tie at Derby County.

"You make your own stories. Then I have to answer. I am not doing that. It is awful and horrible but you can write [what you want].

"It is the third time I am sacked and I am still sitting here. I am obliged to do that [attend news conferences]. A lot of people ask in a disrespectful way. I have always faith.

"When you lose it is worse. I predicted before Southampton.

"Now I cannot lose any more because then for the fourth time I have been sacked. Then it might be the truth."

Van Gaal also vowed to carry on fighting to improve United's position of fifth in the Premier League.

He added: "When you lose a game, especially in the last minute, you are fed up.

"But it is your duty as a manager and a player to stand up again and to do what you have to do, because that is a professional attitude."