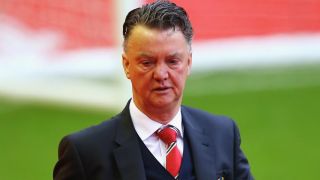 The Dutchman reportedly tendered his resignation after Saturday's 1-0 defeat to Southampton - Charlie Austin's strike condemning United to his sixth Premier League defeat of an underwhelming campaign.

But Van Gaal hit out at the media during his news conference on Thursday, labelling as "awful and horrible" reports he had to be persuaded to stay by Woodward.

The United boss has faced severe criticism over a lack of attacking play and some indifferent results, but insists he wants to see out his contract, which expires at the end of next season.

Asked about claims he offered to walk away from the job, Van Gaal told reporters: "I have not mentioned that, ever. I am always fighting.

"I have signed a three-year contract here. It's a process, not one game, and I want to continue until the end.

"When I'm not willing to do that, I don't think I would have started here one and a half years ago.

"When I have signed for clubs, I have always spoken a long time with the CEO or with the owners, not only at United, but also at Bayern Munich and Barcelona, and I have the faith that they always support me.

"But that gives more pressure to you, because you must fulfil the expectations they have of you. Of course we can fulfil those expectations. We are now only halfway."

With United fifth in the Premier League and out of the Champions League and the League Cup, their FA Cup quest continues with a trip to Championship side Derby County in the fourth round on Friday.

And Van Gaal, referencing reports on three occasions that he had been sacked, acknowledged: "I cannot lose any more, because then I am condemned for the fourth time that I have been sacked.

"Then maybe you will have written the truth, because sometimes it happens."