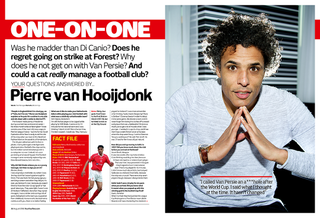 The Dutchman has been engaged in a bitter feud with Fenerbahce’s Van Persie since the 2014 World Cup, when Van Hooijdonk criticised his performances for the national team in Brazil.

Van Persie responded by saying his elder adversary should “stick to playing golf”, and when asked about the retort on Dutch TV in October 2015, the 46-year-old Van Hooijdonk bit back.

“It was in a certain context, although I did say it,” Van Hooijdonk admits, in the August 2016 issue of FourFourTwo, out now in shops and on iPad.

“At the World Cup I was doing TV analysis and I thought he had a poor tournament; he scored a great goal against Spain, but he never played as well as he did when Manchester United became champions [in 2012/13].

“He presumably thought he’d had a great tournament and later did an interview where he slagged me off. I was asked about that, and of course I didn’t like what he said, so I said: ‘a***hole’.

“I was just saying what I was thinking at that moment, but that hasn’t changed since. It probably says more about him than me. He was a fantastic talent at Feyenoord and he realised he was already one of the best players at 18, but that does not mean that you can behave like you have been the best player for several years.”

Read the full cover story on Jose Mourinho in the August 2016 issue of FourFourTwo, where we ask whether the game’s biggest ego can make his mark on one of its biggest clubs. Also: our Euro 2016 review, meet the managers who invented modern football, this month’s One-on-One with Pierre van Hooijdonk, the German George Best, 66 facts you didn’t know about ’66 and much, much more. Go get it, then subscribe!