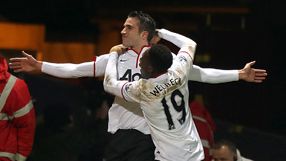 Upton Park had been returning West Ham midfielder Cole's stage until Van Persie's majestic injury-time equaliser deprived the home side of a thrilling victory in a pulsating atmosphere.

Cole, signed from Liverpool on Friday by the club with which he made his name before leaving 10 years ago, delivered two perfect crosses for defender James Collins to head West Ham to the verge of victory against the 11-times FA Cup winners.

But Manchester United never know when they are beaten and substitute Van Persie exploded into life as the clock reached 91 minutes, exquisitely controlling Ryan Giggs's perfect long range pass before firing the ball into the net.

The Dutchman has now scored 20 goals since joining the Old Trafford club from Arsenal in August and several have been late match-winners.

He scored a last-gasp free-kick to beat Manchester City last month, struck in the 87th and 90th minutes to seal a 3-2 win at Southampton in September after breaking Liverpool's hearts with a late penalty at Anfield.

"You have to say, the manner of the goal, the pass from Ryan Giggs, the first touch from Robin van Persie and his finish were absolutely world class, absolutely fantastic," United manager Sir Alex Ferguson told ITV Sport.

"I think it's a challenge, coming to a new club, but his experience, he's a well-established international, he's a mature age now and he's brought that maturity to our forward line.

"His performance coming on was tremendous."

Manchester United's ability to get out of tight spots is unrivalled in the Premier League, although there seemed little prospect of a late show against West Ham who were keeping the visitors at bay after Collins' second goal just before the hour.

Giggs headed wastefully over the bar as the clock ticked down and even Ferguson feared the worst.

"When Ryan Giggs headed over the bar, Danny Welbeck hit another over, Tom Cleverley hit one more over and then Shinji Kagawa had one blocked near the line, I thought it wasn't going to be our day," he said.

"But you have to praise the pass from Ryan and the first touch of the ball from Robin. The finish was absolutely world class. You are hoping he is going to score given his ability to do that."

Cole was given a standing ovation when he was substituted with his side leading 2-1 but in the end his homecoming was turned a little sour by the ruthless Van Persie.

"We were unlucky not to win," Cole told ITV. "It was a great start for me but it feels like a missed opportunity."

"It was a nice return for me. I don't like all the fuss I just want to get out and play football and it was nice to get out, be involved and get minutes under my belt."

"It's more than a tad disappointing," he told reporters. "You never beat Manchester United until the final whistle blows, I've learnt that in the past.