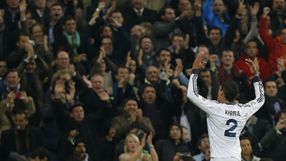 The 19-year-old Frenchman produced a near-impeccable performance to thrill the home fans at the Bernabeu, making several vital interceptions and crowning a mature display with a fine headed equaliser seven minutes from time.

The goal boosted Real's chances for the second leg at the Nou Camp at the end of next month and earned Varane, signed from Lens on the recommendation of his idol Zinedine Zidane in 2011, effusive praise from team mates and club officials.

"He played a sensational game and finished it off with a headed goal that keeps us alive in the tie," former Real striker now club director Emilio Butragueno told Spanish television.

"He is 19 years old and to come out and play against Barcelona and not make any mistakes is very significant."

Real coach Jose Mourinho included Varane, a France Under-21 international, in his starting line-up to cover for the injured Pepe and the suspended Sergio Ramos, leaving Spain centre back Raul Albiol on the bench, and it proved an inspired decision.

He showed he has a cool head under pressure, can read the game well and used his blistering pace to good effect to thwart the likes of Messi, Pedro and Andres Iniesta.

Apart from his goal, two moments stood out.

The first when he brilliantly cleared a Xavi shot off the line in the 21st minute with goalkeeper Diego Lopez stranded and the second 11 minutes after halftime, when he threw himself full length and nipped the ball away from Cesc Fabregas as the Barca midfielder bore down on goal.

"I am very happy with my performance," Varane, whose father is from the island of Martinique, told reporters.

"It was an incredible experience for me and to score a goal is a dream," he added.

"I still don't believe it. It was my best game since I joined Real Madrid.

"The coach congratulated me, the whole dressing room, the president, everyone was very pleased."

Judging by Wednesday's performance, Varane could become a fixture in the Real backline sooner rather than later and must be high on Didier Deschamps' list for a first call-up to the France squad.