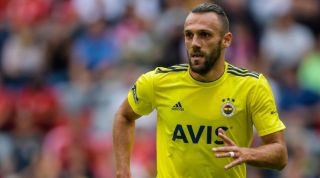 Ole Gunnar Solskjaer's side opted against signing a replacement for Romelu Lukaku, who joined Inter, this summer.

However, the Red Devils are keen to add to their centre-forward options in the January transfer window.

And Muqiri, who plays his club football for Fenerbahce, is a potential target.

United scouts watched the centre-forward against England on Tuesday, with Muqiri finding the net in a 5-3 defeat.

The 25-year-old only joined Fenerbahce in July but has already attracted the attention of Tottenham and United.