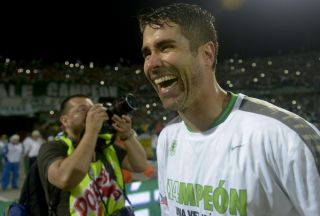 Sanchez, 28, transferred to the Premier League from La Liga outfit Elche, where he spent one season.

The 44-time Colombia international said countryman Angel, who made 175 league appearances at Villa for 44 goals, was one factor in getting him to move to England.

"I spoke to Juan Pablo Angel. He told me I absolutely had to come here to Villa," defensive midfielder Sanchez told AVTV.

"When I had the opportunity to come to Villa, I had no doubts. It's something I've always dreamed of, for me and my family.

"I've always dreamed of playing in the Premier League. I hope this is going to work really well.

"I've always followed English football particularly if there has been a Colombian playing here. He [Angel] was a goalscorer and was very important at this club.

"I followed his time here because he was always scoring. For me the most important thing was the point the manager [Paul Lambert] always wanted me to come here.

"I've got a feeling this is a family club, I'm looking forward to experiencing the atmosphere in the dressing room."

Sanchez said Lambert's assistant Roy Keane was another bonus of the move to Villa Park, with the former Manchester United hero on the books as an assistant at both Villa and the Republic of Ireland.

"Of course it helps to have a world-class midfielder like Roy Keane here," Sanchez said.

"He was a big player for Manchester United and I used to watch him play on the TV when I was kid growing up in Colombia.

"He's certainly got some advice to give to me.

"I'm very receptive to what great players like Roy Keane and Paul Lambert have to teach me."