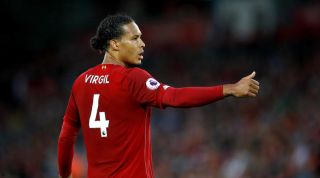 Virgil van Dijk insists he was not disappointed to see Harry Maguire overtake him as the most expensive defender in football history last summer.

Liverpool paid a world-record fee for a defender in signing Van Dijk for £75m from Southampton in January 2018.

The record was then passed to Maguire when United paid £80m for his services in August.

And Van Dijk insists he has no hard feelings towards the England international, who he will come up against at Anfield on Sunday.

"No, good luck to him," the Netherlands international replied when asked if he was bothered about no longer being the world's most expensive defender.

"There was always going to be a time when that was going to change, because that’s the market.

“He doesn’t have any influence on that. We players don’t have any effect on the price and it’s the same for him as it was for me. But the price does come with pressure.

“I thought it wouldn’t change too much for him because at Man United there’s always a lot of pressure anyway - there is at all the big clubs."

Both transfer fees raised eyebrows at the time, but Van Dijk says the easiest way for Maguire to silence the doubters is by performing on the pitch.

“What can you do? I’m not listening! It doesn’t really change anything in my head,” he added.

“I just like to perform the best way I can and sometimes it comes with mistakes, we can all make mistakes, but you try to be as good as you can and get the maximum out of yourself.

“You just have to do what you love to do and play your best game, get your qualities out on the pitch, help the team. Enjoy all that and don’t think about the other things.”