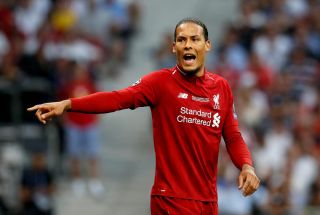 Having fallen a point shot of a first league crown since 1990, Jurgen Klopp’s men ended the season in style against Tottenham.

Mohamed Salah’s spot-kick got the Reds off to a dream start in Madrid and substitute Divock Origi settled any nerves to seal a 2-0 triumph that sparked wild celebrations.

Klopp’s hunger for more success was clear within minutes of the final whistle and man-of-the-match Van Dijk wants much more.

“I think we should be hungry anyway,” the Dutchman, who brought a bottle of beer into the press conference, said.

“But this season with Liverpool ended today, we got the Champions League.

“It’s something that we definitely wanted but I think in July when we start again everyone starts at zero.

“Everyone is working towards their goals and obviously we want to challenge for every trophy if possible. We have the squad for it.

“Hopefully we can challenge Man City again next season for the title because I don’t think they will go anywhere, but we will go nowhere either.

“To be two years in a row in the Champions League final is something we hope to be every year, but we know how difficult it is to reach it.

“But we are all ambitious. We all want to have these nights a couple of times a year.

“So, let’s just go for it, work hard, stay humble. That’s the only way forward.”

Van Dijk’s display against Spurs was as solid as so many other he has put in over the course of a season to remember.

Being the world’s most expensive defender never seems to weigh heavy on the Holland international’s shoulders, which is why his peers voted him the PFA Player of the Year.

Asked if his man-of-the-match display in Madrid points to the fact he could even be crowned the world’s best for 2019, Van Dijk said: “I think (Lionel) Messi is the best player in the world.

“I think he deserves it as long as he plays, so the Ballon d’Or is not something I’m definitely thinking about.

“But if it happens by any chance then obviously, I will take it, but I don’t think there is any case.

“I think he’s still the best player in the world. It doesn’t matter if he’s not in the Champions League final or not.”