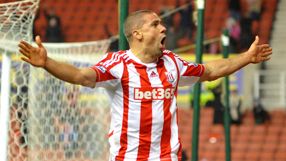 Ireland international Walters, who headed two own goals and missed a penalty in his side's 4-0 home league thrashing on Saturday, went from zero to hero as his side beat second tier Palace in a replay to set up a fourth round clash with Manchester City - a repeat of the 2011 final.

Premier League Sunderland suffered an upset as they lost 2-0 at home to Championship side Bolton Wanderers on a busy night of third round replays during which third-tier Brentford set up a dream tie against holders and West London neighbours Chelsea by beating Southend United.

Top flight Fulham avoided going the way of Sunderland, surviving by the skin of their teeth at second-tier Blackpool, Kieran Richardson equalising with the last kick of normal time before Brede Hangeland scored in extra time for a 2-1 victory.

Bolton, for whom Marvin Soredell scored twice after half-time, will face Everton in round four while QPR will fancy their chances of a cup run with a home draw against third-tier MK Dons who beat Sheffield Wednesday 2-0.

Fulham will be away to either Manchester United or West Ham United who replay their third round tie on Wednesday.

Walters was left red-faced after his calamitous display against Chelsea but recovered to inspire Stoke after Palace had dragged the tie into extra time with Glen Murray's penalty.

First he headed in a Matthew Etherington cross to make it 2-1 before shooting home to deflate Palace. Cameron Jerome completed Stoke's victory.

Leeds United booked a fourth round clash at home to Tottenham Hotspur after El-Hadji Diouf sealed a 2-1 victory at Birmingham City.

Third tier Brentford, whose history is lacking many notable highs despite their ground being directly under the Heathrow airport flightpath, set up an enticing cup derby with Chelsea thanks to a 2-1 defeat of fourth-tier Southend United.

The fourth round will be played on the weekend of January 26-27.