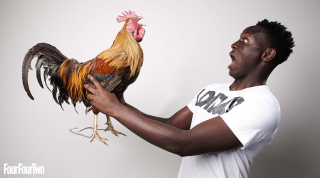 Wanyama has earned something of a hard-man reputation himself thanks to a tough-tackling playing style that led to three red cards last season – even if they were his only sendings-off in English football since joining Southampton from Celtic in summer 2013.

The Kenyan is now enjoying life at White Hart Lane after a £15m move to Tottenham this summer, and says English football has been ingrained in his life since childhood.

“I used to watch Manchester United and I really liked Roy Keane,” said the midfielder, speaking in the November 2016 issue of FourFourTwo, out now. “He was a really good player. I liked his character as well as his football ability.

“I’ve never met him, but I don’t think I’d be intimidated. The way he commands his team gives you that energy to work hard. If I can get to his level, that would be great.”

Celtic were Wanyama’s first British club, and he spent two years in Glasgow from 2011-13 after joining from Belgian side Beerschot.

The Hoops were a popular club in his home nation – and their famous 1967 Lisbon Lions inspired his first shirt number choice in Parkhead.

“In Kenya, there’s a big fanbase of both Celtic and Rangers,” said Wanyama. “For a very long time they had charity set-ups in Kenya, and that built the support and the rivalry. I used to see people in Celtic and Rangers jerseys going to the pub to watch their games.

“When I moved to Celtic I had never played in the Champions League. I used to watch them playing in big European matches, and it was my dream to one day win the competition. That was why I took the No.67 jersey.”

Read the full interview with Victor Wanyama in the November 2016 issue of FourFourTwo, out now, in which we evaluate the making of Zlatan Ibrahimovic by speaking to those who helped him along the way.

Also in the mag: Your Footballing Bucket List, a year with Massimo Cellino by Neil Redfearn, Lothar Matthaus One-on-One, Colin Kazim-Richards on his crazy career, a bizarre history of loans, inside the Cristiano Ronaldo factory, the non-league team with no players outside term time, how non-league to Premier League is possible and much more. Go get it, then subscribe!