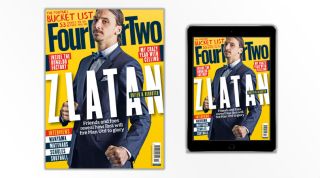 Few men in football elicit as many different reactions as Zlatan Ibrahimovic. To some, he's a cult hero; to others, he's a perpetual self-parody. To most, though, he's a sensational footballer.

Behind the bluff and bluster of the 'I am Zlatan' persona is a model professional – a workaholic who demands total commitment from himelf and those around him. But can he restore Manchester United to their former lustre? We chat to those who know him best. Maybe, just maybe, the 35-year-old can.

Whether it's at the church of Diego Maradona or in Borussia Dortmund's Yellow Wall, get down with Morgan Freeman (or Jack Nicholson...) and start on our Football Bucket List – 53 things every true football fan should do before they die.

Roy Keane is his idol; he likes spaghetti; he played without boots until he was 15, then scored against Barcelona six years later. There aren't many things that intimidate Tottenham's Victor Wanyama... well, apart from Paranormal Activity 3. We caught up with the Kenya captain to talk everything from Mauricio Pochettino and the Champions League to social media and scary movies.

Jack Wilshere's move to Bournemouth, coupled with the scrapping of the emergency loan window, have put temporary deals firmly back in the spotlight. But how did it all start and which brought the most controversy? We delve deeper...

At Loughborough University, there's no time for watching Jeremy Kyle or bulk-buying Super Noodles – not with an FA Cup fixture to play between cramming for exams. So, just why the hell are these students playing non-league football?

Neil Redfearn worked for the most bonkers boss in football and, in this month's FFT, reveals to Simon Austin about the mad truth of life managing Leeds United under Massimo Cellino.

In an era of mega-bucks TV deals and huge international scouting networks, it would seem the path from non-league to Premier League should be a rarely-trodden one – but many players still rise from semi-pro football to the domestic game's summit. FFT investigates how...

Most footballers born in England end up nowhere more exotic than Torquay, but 30-year-old Colin Kazim-Richards has played in seven different countries in the past six-and-a-half years – and boy does he have a few tales to tell us...

In the 1950s, a greasy spoon in the East End helped to produce the English game's most progressive coaches and West Ham United's famous academy. Folks, welcome to Cassettari's, the cafe that changed football.

Got your copy of the new FourFourTwo? Tweet us @FourFourTwo  #MyFFT.

Available from October 5 in print, on iPad and iPhone or subscribe to FourFourTwo here!