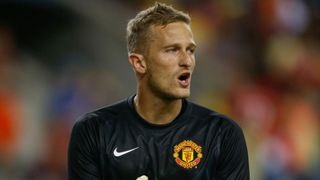 West Brom have cancelled the contract of Anders Lindegaard by mutual consent, with the Danish goalkeeper immediately signing a deal to join Preston North End.

Lindegaard arrived at The Hawthorns from Manchester United in August 2015 but found game time limited under Tony Pulis, making just one appearance for the club in a 3-0 League Cup defeat to Norwich City.

The return to fitness of Baggies first-choice Ben Foster saw Lindegaard fall yet further down the pecking order, joining Preston on loan in January.

And Lindegaard has now opted to make the move to Deepdale permanent.

"It was a very easy decision," he said. "I could have gone to several other clubs in England, but it was a no brainer, I wanted to stay here [at Preston].

"I'm really happy that things have fallen into place before we get closer to the season."