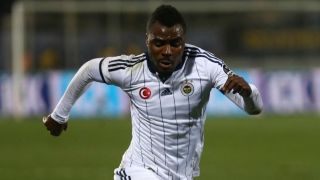 The former Nigeria international is on loan at Al Ain from the 19-time Super Lig champions although West Ham boss Slaven Bilic confirmed this week negotiations were ongoing to bring the forward to Upton Park.

Former Besiktas coach Bilic described talks for the striker as a "complicated situation" but following a club meeting, Yildirim revealed the deal was all but done.

"They will give €1million to us for this agreement and they will have the option to purchase him for €11m. But the deal hasn't been completed yet."

Emenike is currently in his second spell with Fener, having spent two years at Spartak Moscow before returning, but has been on loan with Al Ain for the past six months.

Bilic is currently short on attacking options following injuries to Andy Carroll and Diafra Sakho while Mauro Zarate's departure for Fiorentina has freed up space in the budget for Emenike's arrival.