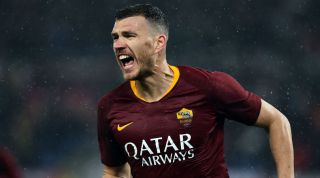 West Ham have a real chance of landing the 33-year-old, according to Sky Sports.

The Bosnian striker has a year left on his current contract and is yet to renew with the Italian giants.

Dzeko has scored 86 goals in 171 appearances over four years in Rome, although he has hit only eight in Serie A this season.

West Ham manager Pellegrini has a special connection with Dzeko, after winning the Premier League with him at Manchester City in 2014.

The 33-year-old would reportedly cost around £12 million, with potential competition from Inter Milan, but the Italian giants would have to sell Mauro Icardi before making a concrete offer.

Dzeko's arrival would likely spell the end for Andy Carroll's West Ham career, with the 30-year-old recieving no new contract offer and becoming a free agent in the summer.

Ranked! Every Premier League manager by how long they'd survive in Game of Thrones

Quiz! Can you name the 50 clubs with the highest average attendances in Europe?