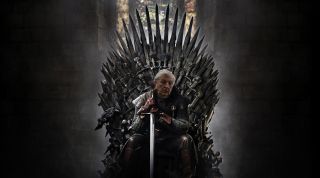 Dead on arrival. Poor Jan: the first time Sky Sports even tried to show him at a game they broadcast a lookalike fan, giving him a real ‘random extra who gets offed early doors by The Hound’ vibe.

Siewert’s Terriers have been so poor, we can’t actually blame the German for his hangdog expression. Not even Ramsay Bolton had this much misfortune with his mutts.

No, we’re not putting Parker here just because Fulham are relegated. Yes, his GoT survival chances are hopeless. Why? Take a good look at Scott Parker.

Square-jawed, handsome, likeable with an air of doomed heroism. How well do characters like that generally fare in the world of Game of Thrones? Exactly. If you get any invites to weddings on Westeros, Scott, we recommend staying well away.

Formerly a triumphant King in the North, there’s high hopes for Brendan’s future. But he’s keen to play them down, naturally.

Do you have an eye on the iron throne, Brendan? No, no, he replies modestly. He’s all about “the group” and “opportunities”. But why is there that 7ft self-portrait of your face now hanging in the throne room? Aha, Brendan laughs softly and flashes you his pearly whites. Ahaha. Who can possibly resist?

Note: Brendan carks it after 500 hairy-arsed invaders from north of the wall track him down.

On one hand, Rafa is a smart tactical schemer, beloved of his local toon. There he is in an ornate robe, smiling enigmatically as he’s carried around in a palanquin powered by four topless Geordies.

Unfortunately Rafa has been picked to be ‘hand’ to a real King Robert whopper: a ruddy-faced, power-drinking, fireplace-chundering monarch. Unless his overlord is gored by a boar (hey, there’s always a chance), Rafa’s days are numbered. Fact.

Suave Lord Littlesilva isn’t the most loyal, but is rising to the top anyway either because he’s a fine coach or because he’s got dirt on everyone thanks to his chain of ill-reputed pleasure houses. No, let’s stick to the coaching.

Anyway, this aptly silver-tongued schemer has surely made one too many enemies to make it to the end. Lanced by Ser Hornet of The Gap, with rosy-cheeked innkeeper Bigsam turning up to chuckle at his wake.

Kind, innocent, blue-eyed urchin Eddie is too pure to last long in Game of Thrones. The most tear-inducing death of any manager, as he gets a big arrow in the back or crushed undertaking some noble cause like trying to protect Callum Wilson from frenzied suitors. Brave Howder, we hardly knew ye.

Has ardent followers who’ll tell you The High Sarri isn’t playing the Game of Thrones by any rules mere mortals understand. He’s playing his own, unique version which requires intense training in the citadel and is best viewed through a fug of dense smoke.

Despite this, The High Sarri is up against it. If his Roman Emperor isn’t summoning him to tip molten gold over his head (almost certainly how oligarchs dream of offing their foes), there’s the danger of 11 mysterious, blue-tipped arrows in his back. Dicey.

Here he is: eager newcomer Ralph Rabbit Hutch, coming down from the mountains with a spring in his step ready to shake up the big boys. What they didn’t tell you, Hutch, is those Saints you’re aligned with aren’t always as forgiving as they seem.

Last we saw, flint-eyed Ser Sparky was offering him a muttered word of advice and a firm handshake – if he survives that encounter, he’s a better man than most.

Enters a few seasons in, like some swarthy Dornish prince with his good looks, exotic accent and sparkly new palace. Tripping up larger rivals with his unusual weapon (the cane), he’s an instant fan favourite.

He really is going to climb the mountain and finally deliver success for his people. Hurrah! Postscript: gets head popped like a rotten melon just as victory looks within grasp.

Being the only Prem manager to boast a squad of dragons gives Warnock a major advantage in Westeros (even if his look is more Doubtfire than Daenerys). He’s also the kind of grizzly old stager who keeps coming back for more.

But let’s be realistic: can anyone who’s made as many enemies as Ser Warn really expect to survive that long? Bitten by a sewer rat and attacked by a mysterious guild of middle-aged men dressed in black. Fate unknown.

‘The Baby-Faced Assassin’ sounds like a character in GoT already. Brought in to restore the fortunes of a glorious but troubled house, Lord Solskjaer wins people over with his talk of doing things “the Lannister United way” and constant references to his siege of Catalonia 20 years ago.

Unfortunately, he isn’t necessarily the first choice (nothing new there). Let’s face it: this could still go either way.

Right, we know this is Game of Thrones, but some good guys have to survive, right? Ser Hughton is clearly one of those. Even his previous houses recall him fondly and he’s flying high in the Eyrie with his beloved gulls. Hughton all the way!

Hang on; what’s that suspiciously Hughton-shaped object plummeting from the Moon Door?

Definitely someone who shows up when the GoT producers realise they’ve killed off too many popular characters and need a new hero. A big, mad, Dothraki with fireworks in his beard and a scimitar in each hand.

Claims he’s ready to go on the attack despite not actually wearing any armour. “My manservant Virgil has got my back,” he says, laughing maniacally and pumping his fist. Godspeed, Jurg, try not to lose your head.

Are we sure Dyche isn’t actually in Game of Thrones already? Character name: ‘Sean Dyche’; a grizzled sellsword who teaches soft, southron lordlings how to wield steel. “If I must, he gravels roughly, “although I prefer going long with the trebuchet.”

Lasts for ages until he’s eventually done in by that old classic: the poisoned worm.

If Sean Dyche sounds like he’s in Game of Thrones, Nuno looks the part. Big greying beard, imposing heft and an aggressive pack of anything-but-dire wolves at his bidding.

Very much a long-termer, unless an offer from the Iron Bank of Stamford Bridge turns his massive head. We all know how that ends.

I mean, is he not an actual white walker already, this bloke? He's got a face that looks like he’s accidentally walked in on Ser Carroll’s late-night revels.

Yet this old zombie is one of the game’s winners so let’s give him a 50/50 chance of survival as he tries to destroy the living world on his giant ice dragon (AKA the West Ham way).

Count Emery looks like a 4,000-year-old vampire but that’s insane, because on Westeros it’s dragons, witches and undead armies (yes); vampires (too silly). Still, he’s been a success since replacing Grand Maester Arsene and is less beholden to the stars than that old astronomer.

Set for a long run. Just remember to lock the toilet door in case a crossbow-wielding Captain Ozil turns up for a surprise late-night call.

He’s an underrated crank, Ser Pep. So despite his hoard of silverware, picture him not as a powerful lord but as a humble swordsmith (local nickname: ‘Bald Forge’), obsessively working all hours to craft the finest attacking weapons in the kingdom.

Gracia is proving himself an excellent coach but he’s also an enigma. Essentially, he’s that character you end up in an argument over whether he’s still alive as nobody can quite remember.

I think he died north of the wall, says someone uncertainly. No, he boarded a boat and with muscular Khal Deeney and is sailing to King’s Landing says another, equally unsure. Only one solution: Gracia is a goddamn Faceless Man and is almost certainly still cracking on.

The ultimate survivor! King Hodge. Roy is the kind of bloke who, after some horrific butchery and possibly a castle blowing up, is discovered alive in the palace library poring over dusty books in seven languages oblivious to the carnage that’s put him next in line to the throne.

Come on Roy, the people need you to lead our defence against fearsome ice men from a far off land. Not got the best record on that score, says Roy. Plus I’ve promised to take counsellor Ray Lewington on a cruise up the Mander.

Why are you edging towards the window, Roy? Roy? Roy!