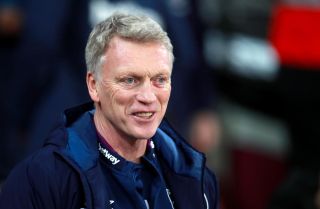 David Moyes insists his West Ham players have been left in no doubt about the importance of Saturday’s showdown with Brighton.

The Hammers lie above the Premier League drop zone only on goal difference but would climb above their visitors with victory at the London Stadium.

The clash looks all the more vital given West Ham’s next two fixtures are trips to Manchester City and Liverpool.

Speaking at his pre-match press conference, Hammers boss Moyes said: “We’re aware of how tough the upcoming games are but, to make it simpler, you can only play each team twice in the league – it depends on when you get them. We’ve got to look at it that way.

“I have to say I’ve been impressed with Brighton. I think they’ve shown a good style in what they’re trying to do.

“They’re not on the best run at the moment and we have to try and capitalise on that and use our home advantage to the best we can.

“I’m hoping that Saturday gives us a great opportunity to pick up three points. It won’t be easy, but we have to try and take every opportunity we get, especially at home where we could really do with a really good backing from the crowd to help us and give the players a big lift as well.

“I’m really lucky that I have a couple of players like Mark Noble, Pablo Zabaleta, some of the boys who have been at the club for a while. They’ve not been slow in telling the players what’s expected and what’s needed at the club.

“We’ve been in this position before and we’ve got out of it. We’ve got a little bit of experience of this, so hopefully our experience together will help us get out of it.”

Moyes is set to hand a debut to Tomas Soucek, the Czech midfielder signed this week initially on loan from Slavia Prague.

“He’s only had a few days’ training, but he’s been at a training camp and he’s had a couple of bits of football since their winter break,” added Moyes.

“I think he’s a good midfield player, he’s comfortable with the ball, he’s got an ability to get forward and he can cover a lot of ground for us, we hope, during the course of the season, and then every game at the moment.

“We’re just trying to weigh up where he is. Obviously I’m going to have him involved, but I think it could be a bit quick for him. We’ll assess that.”