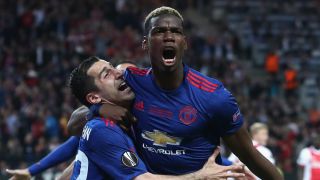 Mkhitaryan is widely expected to move to Emirates Stadium from Old Trafford as part of the deal that will take Alexis Sanchez in the opposite direction.

In an Instagram post showing himself, Pogba and the duo's agent Mino Raiola, the 29-year-old wrote: " What am I getting for my birthday?"

Arsenal appear set for a busy week in the transfer market after also being linked with by Pierre-Emerick Aubameyang.

Borussia Dortmund chief executive Hans-Joachim Watzke claimed Arsenal had lodged an initial bid for their top scorer over the weekend, reported to be worth in the region of €50million, although Wenger responded by insisting his club "are nowhere near anything with Dortmund".