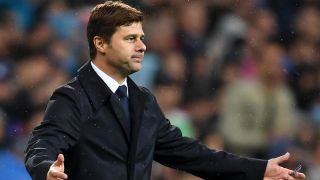 Tottenham manager Mauricio Pochettino revealed those close to him questioned his selection against Real Madrid before labelling him a "genius".

Spurs held Madrid to a 1-1 draw in the Champions League on Tuesday to extend their unbeaten run in all competitions to 10 matches.

But some had their doubts over whether that would be possible after seeing the XI named by Pochettino.

"It was amazing because some people very close to us said, 'Can we be honest with you?' I said, 'Yes'. They said, 'When we saw the starting XI… what the f***? What happened? What is going on in his mind?'" Pochettino told UK newspapers.

"It's too difficult to explain what we want in every single game to try to find. It's not easy to explain to you or to relate to the fans. It's about trust.

"It's about to feel that the manager and the coaching staff when deciding the starting XI or the way to play is always to try to win."

The result in the Spanish capital continued Tottenham's fine start to the season, with Spurs third in the Premier League ahead of hosting Liverpool on Sunday.

Pochettino accepted questions over his selection, and tactics, were part of the job.

"Everyone waits to see the shape or the system or the starting XI, and everyone disagrees. It is difficult to be in complete agreement with the manager," the Argentinian said.

"It not only happens in Tottenham. It happens around the world. But that is very good if we can do the job."