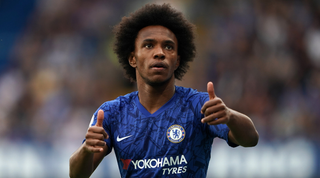 The Italian champions have mastered the art of picking up top-level players for nothing over the last decade.

They've brought in the likes of Fabio Cannavaro, Andrea Pirlo and Paul Pogba without paying a penny in the past and this summer secured the signings of Aaron Ramsey and Adrien Rabiot for free.

Tuttosport reports that the Old Lady are already paying close attention to Willian’s situation as the Brazilian is out of contract at Stamford Bridge next summer.

Juventus boss Maurizio Sarri coached the 31-year-old during his spell in charge of Chelsea last season and is a fan of the player.

However, Fiorentina youngster Federico Chiesa remains the Serie A champions’ top target for the right wing.

Juventus are also tracking PSG right-back Thomas Meunier, who is also in the final year of his contract, after the French club tried unsuccessfully to tempt the Italian giants into a bid in the final hours of the transfer market.

VALUE Juventus' list of free transfers since 2009 is... enviable