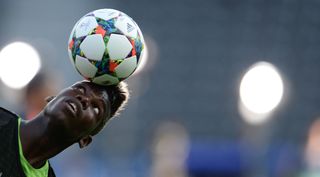 The former Napoli and Parma man had enjoyed a fruitful two-year spell in Turin before the 2006 Calciopoli scandal brought Juventus crashing down to Serie B and led the departures of several key personnel - including future Ballon d'Or winner Cannavaro and manager Fabio Capello.

His second spell, however, was one to forget. Injuries, poor form and Juve's season ending in a Europa League hammering at Fulham - where Cannavaro was sent off - meant the Italian legged it to Dubai-based side Al-Ahli in 2010.

Described as “the bargain of the century” by Gianluigi Buffon, Pirlo joined the Old Lady after a trophy-laden decade at rivals Milan, where he won the Champions League and Serie A twice.

Further silverware followed at Juventus, who proved his final club in Italy after previously turning out for Brescia, Inter and Reggina before joining Milan.

Pirlo won four consecutive Serie A titles in Turin, scored a number of trademark free-kicks and formed a formidable relationship with Claudio Marchisio and Arturo Vidal before leaving for MLS in 2015. Bargain indeed.

Arguably Juve’s most famous - or infamous - free transfer of the last decade. Pogba signed for the Bianconeri aged 19 after growing frustrated at the lack of opportunities given to him at Old Trafford under Sir Alex Ferguson.

Ferguson, who played Park Ji-sung and Rafael in midfield during Pogba’s time in Manchester, claimed that his relationship with the Frenchman’s agent Mino Raiola was like “oil and water” in his 2015 autobiography.

Pogba instead established himself as one of the world’s best young midfielders during his time in Turin, and was subsequently brought back to Old Trafford for a world record fee of £89m - describing his time at Juventus as “a holiday”. Three years later, the 26-year-old has claimed he is ready for “a new challenge” away from Manchester.

Brazilian hardman Lucio arrived at the Allianz Stadium from Inter Milan in summer 2012 after a distinguished career in German football with Bayer Leverkusen and Bayern Munich, plus four major trophies – including the Champions League – at San Siro.

On this occasion, however, his timing wasn't up to scratch. Lucio initially struggled with injuries and then failed to displace the solidified trio of Andrea Barzagli, Leonardo Bonucci and Giorgio Chiellini in Juve's starting XI. Indeed, Lucio made only one appearance in Serie A for the Bianconeri all season.

Barzagli, Bonucci and Chiellini went on to form the club's backbone for years to come, but Lucio departed only five months into his two-year contract and returned to Brazil with Sao Paulo.

Spaniard Llorente scored 118 goals for Athletic across an eight-year spell in the Basque Country before heading east to Italy.

The 34-year-old formed a good relationship with fellow striker Carlos Tevez during his time in Turin - even claiming that he spent more time with the Argentine than his girlfriend.

After a solid-if-unspectacular record of 27 goals in two-and-a-bit seasons at Juve – culminating in an appearance off the bench as his team went down in the 2015 Champions League Final – Llorente signed for Sevilla and has since played for Swansea and Tottenham.

Coman has a footballing CV some can only dream of - the Frenchman has won seven league titles and three domestic cups in three different countries.

The 23-year-old, however, has not had things all his own way. He only made four appearances for PSG before joining the Old Lady in 2014, inking a four-year deal after his contract expired.

But more of the same followed in Italy. Coman made only five Serie A starts in 2014/15 before being turfed out to German champions Bayern Munich on an initial two-year loan deal, which was made permanent in 2017 - and has since scored 25 goals for the Bavarians.

Germany international midfielder Khedira has been one of Juve’s more successful free transfers in recent times. After five seasons in Madrid – a move partially won on the back of an impressive 2010 World Cup – the 32-year-old has spent another four at Juventus and helped the Old Lady to a Champions League final in 2017.

Khedira has proven himself a reliable option in midfield for Juve amid the departures of Arturo Vidal and Claudio Marchisio, but suffered a miserable interrupted 2018/19 after being diagnosed with an irregular heartbeat.

Brazlian right-back Alves, like Lucio and Fabio Cannavaro before him, had played his best football elsewhere before arriving in Turin in 2016.

The 36-year-old was part of Pep Guardiola’s all-conquering Barcelona side of the 2010s and spent eight trophy-laden years in Catalonia, winning La Liga six times and the Champions League on another three occasions.

The former Sevilla man only played 19 Serie A games for the Old Lady but scored six goals in all competitions - including one in the 2017 Coppa Italia Final - before heading to Paris Saint-Germain after just one season in Italy.

BIG INTERVIEW Dani Alves: "I'd already taken the decision to join Juventus without looking around first and it kind of harmed some people close to me"

A few eyebrows were raised when Juventus signed Can from Liverpool last summer after he stalled on a new deal at Anfield. The 25-year-old initially struggled for game time in Turin, making cameo substitute appearances and picking up injuries in his first few months at the club.

The German's form turned at the start of the year, however, when he started more games under manager Max Allegri and scored four goals in seven games – before injuries again disrupted his progress.

Arsenal fans were heartbroken when, after months of contract talks and the Gunners withdrawing an offer, it was finally confirmed that Ramsey would be leaving after 11 years in north London.

The 28-year-old had been one of the Gunners' standout performers in recent years, scoring 64 goals in his time at the Emirates – including crucial ones in the 2014 and 2015 FA Cup finals.

The former Cardiff City man, who reportedly also held talks with Barcelona and Paris Saint-Germain, is rumoured to be on a huge £400,000-a-week contract in Turin.

Juventus already have a plethora of midfield options including Miralem Pjanic, Blaise Matuidi and Rodrigo Bentancur, but have recently added Frenchman Rabiot to their overflowing pool.

The 24-year-old, who was also linked with Manchester United, suffered a complete breakdown in relationship with PSG during his final season in Paris.

It has been a year to forget for Rabiot – who refused to be named on France’s standby list for the 2018 World Cup squad after not being picked by Didier Deschamps – but the young midfielder will hope new surroundings in Turin offer cause for optimism.

QUIZ! How many of Arsenal's 50 biggest transfers can you name?