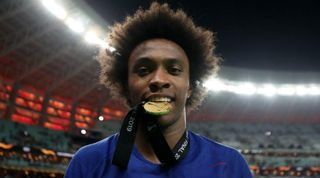 Chelsea are reportedly looking to tie Willian down to a new contract to ward off interest from abroad.

According to the Express, Frank Lampard is keen to offer Willian, currently 31, a one-year-extension to his current deal which expires at the end of the season.

This would be unwelcome news for his former manager Maurizio Sarri, who is keen to bring him to Juventus, and also Barcelona, who have been repeatedly linked with the Brazillian.

However, according to the Metro it is specifically Sarri's presence in Turin that is putting him off wanting a move to Serie A; Willian has apparently told friends that he didn't like his former boss's style of football.

Willian is one of Chelsea's most senior players, having joined the club in 2013. Only Cesar Azpilicueta has been at the club longer than him.

With all the excitement around how Chelsea's young players have started the season, Willian's quietly impressive form has gone a little unnoticed. But he has started the season well under Frank Lampard, having inherited the No.10 shirt vacated by Eden Hazard, scoring the winning goal in Chelsea's Champions League victory over Lille and keeping big-money signing Christian Pulisic out of the team.

Speaking after the game, Lampard was full of praise for Willian, saying: “I want to see him happy. I want to see a smile on his face because his work ethic has been brilliant.

“He can take people out of the game with his speed and trickery and he can score goals for us."

When asked whether there was any update on a contract extension, Willian said: "No, nothing. [But] I am calm, I am relaxed. I wait for the club."