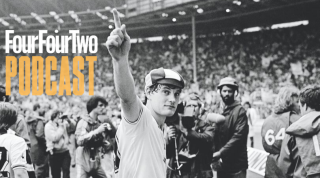 The former playmaker was one of the most talented footballers of his generation – but his style of play always felt unsuited to the English game of the 1980s and, while appreciated for his technical ability, he perhaps was not as lauded or as influential as he could have been.

As a manager, he took a continental approach to Swindon Town, leading them to promotion to the Premier League, and guided Chelsea to an FA Cup final with a cosmopolitan flair they had not previously been associated with. The tactical ideas he implemented as England boss in the late ‘90s can still be seen today – though later career stints at Southampton, Wolves and Spurs may stop us acknowledging it fully.

Is it time to reappraise Hoddle’s career? In the latest issue of FourFourTwo Patrick Barclay sits down with the man himself to provide a retrospective on the player they called the golfer.

Now buy the magazine for just £4.99 and get it delivered to your door