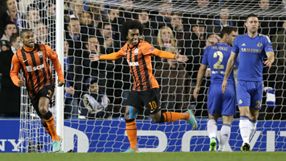 The 24-year-old attacking midfielder was wanted by Andre Villas-Boas during the Portuguese's brief tenure as Chelsea boss, but a transfer to Stamford Bridge two summers ago failed to materialise.

Willian has remained with the upwardly-moving Ukrainian club, making more than 150 appearances since 2007, and was part of the side that knocked Chelsea out of the Champions League last month.

With the January transfer window open, Villas-Boas, now head coach at Tottenham Hotspur, is again being linked with the former Corinthians man, while Chelsea remain keen on the player along with their London rivals Arsenal and Premier League leaders Manchester United.

And Willian, speaking exclusively in the February 2013 issue of FourFourTwo, out now, says he is ready to move away from Eastern Europe and test himself in England.

"Oh, I want to. I hope so. I hope to move there. Maybe next season, or even this month, but it's difficult to say anything because I'm totally focused on my work here, and I prefer not to lose my grip. Who knows, maybe I'll get offers not only from clubs in England but teams from other countries too. Let's see what happens.

"I think I could well be playing there [Chelsea] with [compatriot] Oscar, but I'm trying to concentrate on my game at Shakhtar and forget about the offers."

Willian, who joined Shakhtar for $19 million on a five-year contract in 2007 and has gone on to win four Ukrainian Premier League titles, the Ukrainian Cup on three occasions as well as the UEFA Cup, has also distanced himself from claims by Donetsk team-mate and ex-Arsenal goal-getter Eduardo that there are only three English clubs 'good enough' for Willian: Manchester United, Chelsea and Arsenal.

"Absolutely not. Tottenham are a big team with a great structure and great players too. I would rate them with Chelsea, Arsenal and Manchester United."

Read the full interview with Willian in the February 2013 issue of FourFourTwo, which features the Players' Poll, after we surveyed 100 professional footballers in England and Scotland and received incredible responses on drugs, racism and match-fixing. The issue also includes a One-on-One interview with Rio Ferdinand and the 28 funniest stories you've never heard. Buy it now, digitally and in print