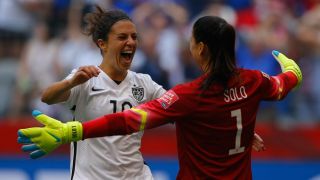 Millions of Americans tuned in to watch the US win the Women's World Cup final on Sunday night, shattering television ratings records.

Fox Sport said the broadcast of the 5-2 victory against Japan drew a 15.2 overnight Nielsen rating, which measures household viewing in larger markets in the US.

That topped the 13.3 overnight rating ABC got for the iconic 1999 Women's World Cup final at the Rose Bowl and nearly doubled ESPN's 8.6 from the 2011 final that also matched the US against Japan.

It also stacks up well against viewership numbers for other sports, with the two College Football Playoff semis getting 15.3 and 15.5.

Game 6 of this year's NBA Finals drew a 15.9 overnight rating on ABC, but the entire series averaged a 13.9 overnight.

The series-clinching Game 6 of the Stanley Cup Final produced a 5.6 overnight for NBC.

The US won the trophy thanks to a hat-trick from Carli Lloyd, who scored three times in the first half at BC Place in Vancouver as the United States clinched their third World Cup.