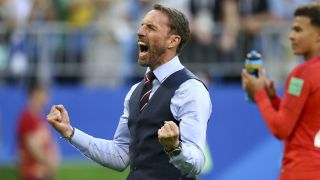 England manager Gareth Southgate has no doubt that winning the 2018 World Cup would result in his players being even more revered than those who guided the country to their last success in 1966.

Southgate's team have surpassed the expectations of most in Russia, reaching their first World Cup semi-final since 1990 despite the group being relatively inexperienced.

Of the 32 countries who began the tournament, only Nigeria and France have squads with a younger average age than England.

Yet, while some suggested prior to the World Cup that such a situation would be a hindrance, it has been anything but, and Southgate has been keen to get across that the players are on the precipice of untouchable status.

"We've talked, touched briefly, certainly, on the team which won [the World Cup in 1966], how they're still held and revered," Southgate told reporters.

A full day of training ahead for the , as we prepare to travel to Moscow tomorrow.Our semi-final moves closer... July 9, 2018

"At the beginning we were working together with the lads and trying to sell them the vision of what's possible, what we're looking to achieve in the long term.

"We also feel we've had events on when we've been in camp when some of those guys [from the 1966 squad] have been in, when the road was named at St George's [Park National Football Centre, England's training base at home] after Sir Alf [Ramsey, the World Cup-winning coach in 1966].

"I've met quite a few of those players and we know exactly how they're held and perhaps in the modern era that would be even crazier, [with] social media and everything else, the global thing is so much bigger."

England face Croatia in their World Cup semi-final on Wednesday.