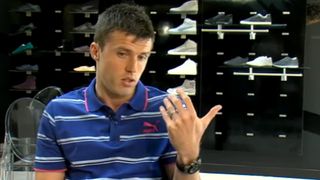 The holding midfielder is an extra layer of defence. If they get dragged out of position, that opens up a channel of attack for the opposition to expose.

Inviting an assault on the heart of your rearguard can be fatal and that's why, despite the temptation to fight fires elsewhere on the pitch, you've got to hold your position, says Manchester United's Michael Carrick.

From working with your team-mates to knowing when it's safe to leave your post, the former Tottenham player explains all in this tutorial.