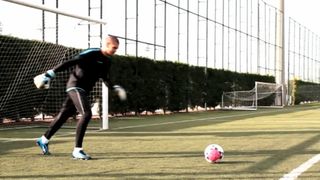 To wear the number one jersey at Barcelona you not only have to be a fantastic goalkeeper, but a highly accomplished footballer. Victor Valdes is both.

The Catalans’ shot-stopper reads the game like an intelligent sweeper, knowing when to offer an option to a team-mate or spring from his line to cut out a through ball.

His footwork, range of passing and control, make him indispensable to Barcelona’s style of play according to Nou Camp supremo, Tito Vilanova.

"For years he has helped us a lot to bring the ball out from deep. If he started hitting the ball long, we would lose our combination game.”

Valdes’ ability to quarter-back the play from his 18 yard box owes much to his hard work on the training field.

From how to pick out a team-mate with a throw to hitting the ball’s sweet spot, Valdes reveals the secrets to his pinpoint passing.

Victor Valdes in an ambassador for Penalty, the only genuine Brazilian football brand in the UK. Products are now available to purchase from Pro Direct Soccer. For information visitwww.penalty.com.br