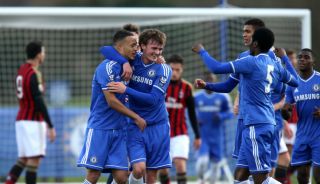 What sacrifices do you have to make to succeed at a Premier League academy?
When I was in high school I’d do a full day and then me and my mum or dad would drive me from Southampton to Chelsea for training, which is about an hour away, three or four times a week, as well as to the game on a Sunday. It was hard for my family in terms of how much effort they had to put in to just get me to training - they very rarely had any time off. But I have to say it was great fun for me; I was doing what I loved to do.

Do you learn life skills at a Premier League academy?
During my early years at Chelsea it’s all very training ground and football based. However, as you progress through the age groups you start doing interviews and photoshoots and that’s when you really start to get a feel for life as a footballer and it does prepare you for that in that sense. We’d get lessons in social media and were told what we should and shouldn’t say interviews, which was a big help.

Does it prepare you for life in professional football?
When I was 19/20 I famiiarised myself with the leagues below because I realised I needed to start going out on loan. I went to Reading and that was a massive risk. I had a good season at Brentford prior to that and joined a great club, I’m doing well and personal it was a good choice. It was a hard decision to leave Chelsea - other players have stayed there longer - but I needed to take another route.

It was a brave choice …
Leaving Chelsea wasn’t just my decision, I spoke to other people close to me and it was home to me – leaving was a massive decision. But I thought it was for the best. I had to play first team football somewhere, I was 20 and now I’m 21 in a Championship team. Some of the boys are still there pushing for the first team and doing really well, but different routes work for different people. I needed experience of playing to win every week.

What’s the difference between academy and Championship football?
Everything is different; the players you come up against are more mature, stronger, quicker. You’re playing for points; if you lose you have to prove yourself the following week. The Championship is such a competitive league, every game is a hard game and it matters. You know every game is a battle. Under-21 football is different, you go out to try and impress. You go out as a team but you do go out for yourself to impress most of the time. When you’re in a first team in the Championship, you put the team first at all times. You have to train hard every day to take your spot. It’s totally different.

Were you surprised by the difference in intensity?
I went to Rotherham at 18 and it was a bad loan, I didn’t play much. When I stepped on the pitch I realised I needed to step up my game, I realised I needed to do more fitness work and get stronger. You can be good technically, but you then face players who can run faster and further than you. Technically I was ok, but physically I needed work. Under-21 football is technical against players the same age as you. As soon as you play against 28/29-year-olds in the Championship, it’s so different. When I went back to Chelsea after three months it hit me. I realised I wouldn’t go straight into a team when I went on loan. I looked at loans differently after that.

How have you developed physically?
Naturally I was a fit player who could run a lot, but playing week in week out for Reading has helped massively. I go out every week knowing I’ll run as much if not further than a lot of the players on the pitch. At first I was struggling after 60-70 minutes, the last 15-20 was hard. Now I can keep going and going. Training every day with men has been a big help. If you don’t work on it you realise they’ll run all over you. I’m in the gym a lot more now as well.

Are your team-mates your rivals?
They are at first, but once you train with each other every day you become really good friends. We’d go out together at Chelsea. When I got to 21, other players had the opportunity to play there, but I didn’t feel jealous at all, I was happy for them. It’s good to see. Seeing players go out on loan and do well is really good. At a young age you want to prove yourself and get ahead of the players in front of you.