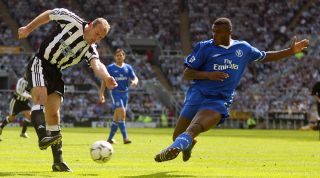 “There’s a striker in our league who’s just like Didier Drogba. He dominates me every time. What can I do to stop him?”

“Getting the better of a difficult opponent like this is all about anticipation and working well with your team-mates.

Firstly, you should try to stop his service. You’ll need to talk and work together to figure out how the opposition is getting the ball to him.

If that doesn’t work, you have to be clever, especially if he’s big and strong like Drogba. This sounds strange, but don’t be too eager to get the ball off of him. If you try to engage in a physical contest with this type of player, you are putting your team at risk because you will probably lose.

How tight you get depends on the kind of ball being played into the striker. If the opposition play a long-ball game, you can stand two to three metres off the forward. If they play it into his feet, get much closer. Give them a little bit of space before they get the ball, then cut off their space before they can turn.

When he gets possession of the ball you can close off the space behind him and your team-mates can press the space in front of him, creating a sandwich out of the opponent. This will make it really difficult for them to threaten.”

Recommended for you:
Ryan Bertrand: Be ready for any challenge

Chris Smalling: How to be the complete defender

Rio Ferdinand's Ultimate Defender
Franco Baresi: How to defend like a master
Nemanja Vidic: Tackle any threat
Ashley Cole: How to handle every opponent