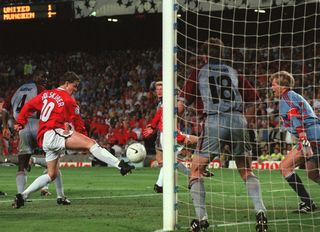 Putting the ball in the back of the net is supposed to be the most difficult thing to do in football, but for Ole Gunnar Solskjaer it was as easy as riding a bike.

The former Manchester United striker scored 126 goals in 366 games in 11 years at Old Trafford – even more impressive given how many of those came from the bench.

We wanted to know how to add more goals to our game, so we got in touch with Solksjaer and asked him to reveal his goalscoring secrets…

"Scoring goals inside the penalty area comes through instinct and knowing your team-mates. When David Beckham had the ball I knew he was going to cross it first time, so I’d sprint into the box.

You can work on timing your runs in training. It’s a case of repeat, repeat, repeat. It’s important you watch and play a lot of games so you know instinctively where the ball is going to land.

I often tell players to make certain runs and they don’t do it. Then the ball ends up exactly where I said it would. I tell them that’s because I’ve seen this game many times before. Football never changes too much.

It’s also important you position your body so you can finish first time if it lands at your feet. You must never take too many touches inside the area. At most you’ve got two touches.

The gaffer (Alex Ferguson) once said to me 'what's a striker's best friend in the box? It's space. Find space. Then if the ball comes to you, fantastic. Finish one or two touch, goal.'"

How to improve shooting accuracy

Gianfranco Zola: Finish in a flash