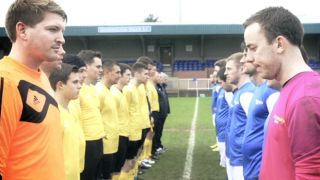 The atmosphere in the Laleham FC dressing room couldn’t be more different. The spirit of Wimbledon’s ‘Crazy Gang’ has been revived.

Above the fist-pumping pre-match tunes there’s dressing room chatter about last night’s mischief and today’s game. The sensible money is on Laleham FC, but football is about as predictable as the English weather that looks set to play its own part in this scrap.

Ash-coloured clouds loom over Imber Court, home of the Metropolitan Police football team and today’s finale. This is where five months of elite level training will come to a head.

FourFourTwo Performance and Lucozade Sport recruited leading experts in the game to help this group of amateur players overhaul their training habits.

Our coaches analysed the attributes of Gareth Bale and Alex Oxlade-Chamberlain and delivered sessions built around their strengths. Players were educated in ball mastery, running biomechanics, hydration and psychology.

The effect has been palpable. Channelling the force of Ox and Bale, both teams head into the second half of the season very much in the hunt for their respective league titles.

But today will be a true measure of how far they have come. Their mettle will be the first thing to be challenged as a bitter breeze sweeps across the pitch.

“We’ve got to believe in our ability and work hard for each other,” Holmbury St Mary captain Chris Marriott spells out to his players. “There’s a trophy on the line here today. Let’s go out there and win it.”

Laleham FC skipper, Steve Grace, delivers his battle cry. “We’re on fire at the moment so let’s keep doing what we’ve been doing all season,” he says. “Let’s believe in each other and fight from start to finish.”

Roars of encouragement reverberate around empty stands. The teams line up, the referee blows the whistle and battle ensues.

This is not the same set of players FFT first saw back in August. They’re fitter, sharper, stronger and more confident.

Assorted onlookers – both of them – could be forgiven for thinking they were watching a far higher standard of football.

Holmbury St Mary are the standout performers, battering Laleham FC for 45 minutes but without breaking the deadlock.

Both sets of players take the opportunity to regroup, rehydrate and re-energise at half-time. Bottles of Lucozade Sport are devoured.

Had this been back in August, St John Ambulance might have had to resuscitate some of the combatants, but the players have got plenty more left in the tank this afternoon.

With their fuel stores topped up, the players continue to tear around the pitch in the second half.

Laleham FC find a surge of energy, and Jay Coombes and Luke Robertson strike in quick succession to put their team 2-0 ahead with 10 minutes to play.

Game over, right? Wrong. Holmbury St Mary dig deep and Mike Walsh and Billy Jones find the target to level the scores on the cusp of full-time.

The pitch is awash with a potent mixture of jubilation and devastation, but there’s no time for the players to catch their breath.

The 90 minutes are up and it’s straight to penalties. The teams huddle in their respective groups on the halfway line.

Laleham FC’s Matt Adams confidently plants the first penalty into the bottom left-hand corner, but it is all downhill from there. Holmbury St Mary bury three in a row; Laleham FC miss two of their next three.

The deciding spot kick falls on the shoulders of Marriott. The skipper doesn’t disappoint, sending the goalkeeper the wrong way before finding himself at the bottom of a Holmbury St Mary bundle.

“We’ve learnt so much through this process,” says a jubilant Marriott. “We’ve picked up a lot of good habits – like hydrating properly before, during and after a game.

“This, coupled with everything else we’ve learned, has helped us to take our game up a level.”

Grace can’t hide his dejection, but finds solace in his new-found knowledge. “This process has given us an insight into what players like Bale and Oxlade-Chamberlain do to optimise their performance,” he explains.

“We might only be amateur players, but by doing a little bit of what they do we’ve seen what a difference it can make at this level.”

To use the same workouts and hydration guide, and read pro tips from Bale and Oxlade-Chamberlain, visit www.performance.fourfourtwo.com/ox-bale

Our specialists first evaluated the players in August. They mark progress five months on

Jon Goodman, Fitness guru
“When we first assessed the players, many of them lacked the stability and lower-body strength they needed to perform at optimum levels.

They were all short of sharpness and fitness. Lasting 90 minutes would have been a real struggle for them. We gave them their results and explained what they needed to do to improve.

I couldn’t make them as fast as Gareth Bale or Alex Oxlade-Chamberlain, but I could show them the sort of things those players do to improve their explosive acceleration and speed.

Once they realised what huge gains they could make with a little bit more effort, they really bought into what we were trying to do.

Come the end of the process, you could see they had worked on the things we discussed and given their overall performance a real boost.

You don’t have to have the talent to train like a pro; you just need to have the right attitude.”

Benjamin Garcia, Hydration specialist
“Whether you’re a park player or a pro, optimising hydration is key to achieving success on the pitch. When I first met the players they didn’t know how important it was to get fluid on board.

To help them understand its impact, I put them through a series of tests, analysed the data and gave them some tips for improving their hydration habits.

For example, becoming familiar with your individual sweat rate can help you manage your fluid intake.

Rehydrating with the right balance of fluid and electrolytes helps maximise your intake following 90 minutes, and replaces key electrolytes lost through sweat.

It’s been great to see the players improve their understanding of hydration and implement the advice.

It’s important that they continue with these habits to ensure they are competing to the best of their ability. I wish them every success going forward.”

Lucozade Sport gives you the fuel to rule