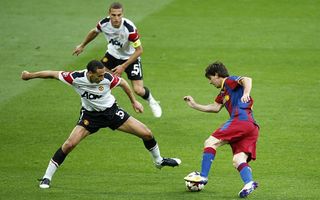 What makes him so good?

His intensity sets him apart from the rest. He’s the only player I’ve come up against that could rival Carlos Tevez as a nuisance. He’s unpredictable and that makes him hard to handle. He tries to nutmeg you or kick the ball against your legs to work off rebounds. You can’t plan for him – he’s hard to read. Suarez also has that killer instinct – he was brilliant at Liverpool, but he’s gone on to another level at Barcelona. When the ball falls to him in the box he’s deadly – he smells goals. His movement is really clever – he’s never standing still and that means you never really know where he is, but he never scored against me!

You’ve got to be on your game for 90 minutes. I used to try and keep him on his left foot and delay him. You have to stand your ground against players like Suarez and wait for them to make their move. If I nibbled he was so quick to react that he’d punish me for committing to the challenge.

SERGIO AGUERO
What makes him so good?
He has a low centre of gravity and is quick and direct. Aguero doesn’t need too many touches – he makes decisions quickly. One, two, three touches – bang – left of right foot he gets a shot off and you have no time to react. He's comfortable shooting with either foot and knows what he’s going to do before he gets the ball. Aguero was the player I struggled with the most during the latter part of my career.

You’ve got to stop the ball getting to him – you need your teammates to stop the supply line. It’s difficult but you’ve got to get on top of him, you can’t give him any time because he’s so lethal. Don’t be predictable – it’s a tactical game and you have to try a few tricks. I used to touch the striker on one side of their body so they thought I was coming that side, then I’d nip around the other side and nick the ball. Against someone like Aguero your concentration has to be 100 per cent for the whole game. It’s no good dominating him for 93 minutes and then switching off for a second because he’ll punish you.

Related article: Sergio Aguero: How to shake off your marker

CRISTIANO RONALDO
What makes him so good?
He’s lethal with both feet, makes decisions quickly and tries to get to goal as soon as possible. Very direct and only has one thing in his mind – goals. He has that killer instinct, no matter where he is on the pitch. He’s got power and pace and can’t be bullied physically. He can score all sorts of goals – tap ins, one on ones, screamers, headers – he can do it all and he can do it in a flash. He smells weakness and he’ll start attacking that as soon as he gets a sniff.

Get right up him when he gets the ball. You have to be tight. Don’t let him turn and run at you because then you’re in his world and you don’t want to be there. You can’t let players like him dictate what they want to do against you. You have to try and keep someone like Ronaldo away from goal – with his back to your goal, facing his own. Get your body in the right position and don’t let him run at you.

LIONEL MESSI
What makes him so good?
It’s almost impossible to stop him. If you nibble at him he’ll go past you or win a free-kick. He’s able to react so quickly to situations and make decisions, it’s difficult to read what he’s going to do. If you try and get physical and kick him he can just play one or two touch so you can’t near him. When he starts doing this you think, ‘There’s no point getting close to him because he’ll just play it around me’, so you stand off and then he runs at you and produces a bit of magic. He always finds a solution to every situation.

It’s got to be a team effort – no one player can stop someone like Messi. You’ve got to stop the ball getting to him because once he's in possession he’s going to hurt you no matter what you throw at him.

WAYNE ROONEY
What makes him so good?
He’s great at dropping off and finding space and then, once he’s on the ball, he can pick a pass, shoot from anywhere, he’s quick, strong, aggressive and happy to set someone up – he’s a nightmare to play against. The best players ask questions of you and Rooney certainly does that. I used to hate playing against players like Raul, Dennis Bergkamp and Gianfranco Zola because they would drop back into areas I didn’t want to go. Their movement would ask questions of you, ‘Are you going to come and mark me here or are you going to stay where you are?’ You didn’t know whether to track them or hold your position. If you stay with them you leave a space in behind and if you don’t track them and they get on the ball facing your goal you’re in trouble.

Communication with your teammates. If he drops into an area you don’t want to go then you have to talk to your midfielders or your full-backs and get them marking him. You have to be organized, vocal and fully focused. You can’t afford to switch off and let him drift into dangerous areas. Be brave and take control of the situation.

GARETH BALE
What makes him so good?
He’s the modern day footballer. If there was ever a player you don’t want turning and running at you, it’s him. He’s unstoppable once he gets going. He’s got power and pace and he knows where the goal is. He’s a phenomenal athlete – very explosive and strong.

You’ve got to try and keep him on his right foot – if he gets it on his left, you’re in trouble. Ideally you’d stop the ball getting to him, but if gets the ball played into his feet you can’t let him turn – you’ve got to get on him and slow him down as soon as possible.