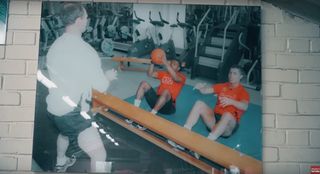 When Cristiano Ronaldo joined Manchester United as an 18-year-old back in 2003, he had braces, acne and the physique of a university freshman.

Fast forward five-and-a-half years, though, and he was a tanned Adonis with a million dollar smile starring in Armani adverts in nothing more than his underpants.

Some people get all the luck don’t they? Well, Ronaldo’s physical transformation didn’t happen by accident - it was the result of thousands of hours in the gym.

How do we know? Well, we spoke to United’s former power development coach, Mick Clegg, who told us all about the Real Madrid star’s journey to physical perfection.

“His training was very specific – on his power, on his speed, on his reactions – to him as a footballer,” Clegg told FFT.

“We did enough strength training with weights to maximise his physical potential, but we would never train too heavy.”

Want to find out more about Ronaldo’s training secrets? All you have to do is click play on the video at the top of the page. Who knows, it could be you modelling Armani underwear in a few years' time.