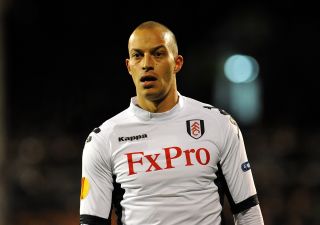 Roy Hodgson doesn’t look like someone who delves deep into popular culture, but Bobby Zamora has recalled a dressing room tale which disproves that statement completely.

Fulham were preparing for the biggest game in their recent history - a Europa League last-16 first-leg tie at Juventus - but Hodgson managed to bring some pre-match humour to the Cottagers’ dressing room.

Speaking in the June edition of FourFourTwo, which you can order with free delivery here, Zamora said: “We always used to have the music blaring in the dressing room. Before that first leg against Juventus in Turin, a huge game, 'Down Under' by Men at Work came on.

“Roy jumped up and belted it out with passion! He was giving it his best moves and even tensed his arms for the ‘muscles from Brussels’ line, absolutely loving it.

“It must have brought back some memories from somewhere. It was hilarious.”

It may nothave had the desired effect: Juventus won the first leg 3-1 – though Fulham responded with a historic 4-1 victory in the reverse leg, helping them on their way to the 2010 Europa League final, where they were beaten by Atletico Madrid.

And Zamora would even go so far to say that Hodgson is the best manager he has ever worked under.

The former striker has worked with countless top-class managers at both club and international level, but ranks the former Fulham boss as his number one.

When asked to pick his favourite gaffer, he said: “I think I must have played for every manager!

“I’d say Hodgson was probably the best – he had us so regimented that I could have played left-back for Fulham!”

Read the full interview with Bobby Zamora in the June 2020 issue of FourFourTwo magazine, available in shops and online from now. Our new magazine looks at the 100 greatest managers in the history of football, exploring the tacticians and tinkermen who have influenced the game more than anyone else, investigates the fall of Barcelona's famed La Masia academy, presents eight pages of quiz questions and football posers to keep you busy during lockdown and discovers the trophy you've never heard of, that Liverpool are proud owners of. We also chat to Jorginho, Shaun Wright-Phillips, Kemar Roofe, Robbie Fowler and more.