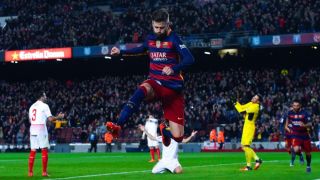 Gerard Pique's first La Liga goal of the season helped Barcelona move eight points clear at the summit with a 2-1 win over Sevilla.

The Spain defender coolly slotted home the winning goal of an entertaining contest just after half-time, ensuring the hosts – who saw closest rivals Atletico Madrid beat Real Madrid on Saturday – avoided a slip-up against the last team to beat them in the top flight.

The win extends Barca's unbeaten run to 34 games, but they were made to work hard against a Sevilla side that showed no fear against the league leaders.

Sevilla came into the match on the back of a seven-game streak without defeat and Vitolo gave them a deserved lead after 20 minutes, before Lionel Messi soothed Barca's nerves when he scored from a brilliant free-kick.

Pique's goal just after the interval gave the home side a slender lead that they held onto throughout a captivating second half, in which their title credentials were tested by a buoyant Sevilla.

In the game's early exchanges, Neymar's dancing feet failed to break down a packed Sevilla defence and Unai Emery's men went close to opening the scoring when Timothee Kolodziejczak flashed a shot over the crossbar from close range.

Sevilla's strong start brought Barca to life and Messi hit the post with a curling corner kick, which rebounded straight to Luis Suarez, who unleashed a hammer of a shot that smashed onto the crossbar before Sevilla cleared their lines.

Rather than sitting back as so many sides do at Camp Nou, Sevilla continued to attack. A brilliantly worked passing move down the left flank saw Benoit Tremoulinas cross to the far post where the unmarked Vitolo side-footed a volley past the stranded Claudio Bravo.

The visitors' hard work was undone when Adil Rami was adjudged to have brought down Suarez on the edge of the box and Messi levelled the scores with an unstoppable free-kick that curled into the top corner.

Luis Enrique's charges finished the first half strongly and continued to press after the break, with Neymar firing an acrobatic volley straight at the gloves of Sergio Rico.

A few moments later, Pique joined the Barca attack and played a neat ball to Suarez, who held it up and fed it back to the Spaniard to slide the ball home from the edge of the six-yard box.

Kevin Gameiro should have made it 2-2, firing straight at Bravo's legs when played in by a superb back-heel from Vicente Iborra.

The game swung from end to end and Sergio Busquets' powerful drive drew a superb diving save from Rico, before Sergi Roberto's thumping header was blocked by his own team-mate as the ball hit Suarez's head when it appeared to be goal-bound.

Sevilla did not go down without a determined fight and Steven N'Zonzi had their best chance to level matters late in the game, but his shot flew wide.